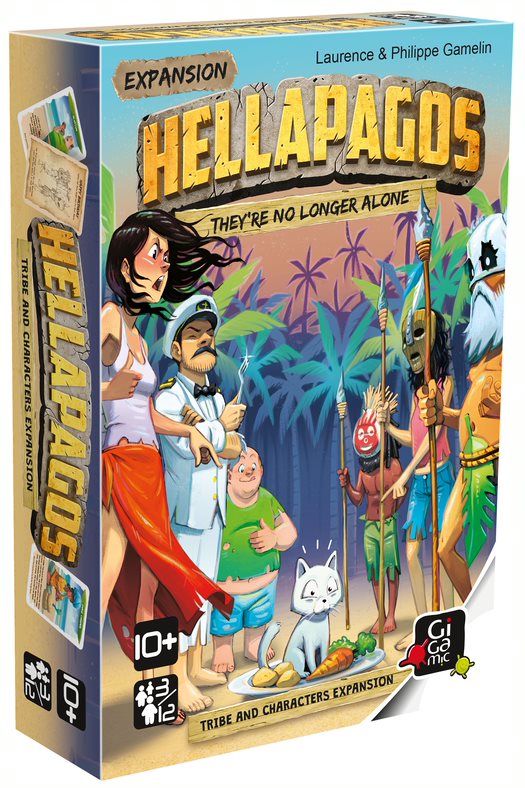 Hellapagos: They're No Longer Alone is an expansion to Hellapagos that adds the following new features to the game:

20 character cards with unique abilities. Characters provide additional distinctions between the players and can help tip the scales in your favor.

30 event cards featuring another tribe which has been inhabiting the island and how the players interact with them. Event cards are flipped over at the beginning of a round and often include significant decisions to be made by the group or by the first player alone.

20 additional Shipwreck cards, some completely new to the game.

All three expansion elements are independent; players can incorporate a single new component, or all three if they wish.

- MIX AND MATCH MODULES: All three expansion elements are independent modules; you can incorporate a single module or all three at the same time.

- 20 OBJECT CARDS: Shuffle these cards with the Wreckage deck and enjoy their new abilities for even more variety in your games of Hellapagos.

- 30 EVENT CARDS: These are revealed at the start of each round and often include significant decisions to be made by the group or by the first player alone.

- INCREASE THE CHALLENGE: These brand new effects will change the strategies you've gotten used to in the base game, refreshing gameplay for hours more of fun!

Hellapagos - Exp. They're No Longer Alone